A rosy future seems certain but Laura has some tough decisions to make.

Maggie is devastated by her daughter’s plans, but Jess is determined to remove the past from her life no matter the upset it will cause. James is no longer running from his past, but a multitude of unresolved issues are set to catch up with Laura.

The third in the Midnight Sky trilogy, Strawberry Sky continues James and Laura’s story. Despite the terrible life changing accident James suffered several months previously, things are at last looking up for the two of them, despite Laura’s overwhelming desire to be a mother. Work is progressing on the house and the business is expanding, with the addition of a  young, orphaned Carneddau strawberry roan and a newcomer to the team with whom Laura develops an affinity.

Laura’s sister, Maggie and her husband, Pete, are having a rough time. The B&B is not doing well and their troublesome daughter, Jess, continues to cause problems and heartache for her parents, as well as for Laura and James. The other complication in the shattering situation Maggie and Pete find themselves in is Cal Armstrong, Jess’s former boyfriend and the father of her baby. Jess’s selfishness and seeming lack of connection to baby Krystal is an endless worry for Maggie and Pete and the pressure is building.

Why did all this drama happen to Laura? All she wanted was marriage and a baby. It seemed life was determined to rub her nose in what she couldn’t have, whipping it from under her nose at the last minute. As Krystal was dropping fitfully to sleep and Pete was walking up and down with her over his shoulder, Laura came into the sitting room. Her eyes went straight to Krystal, then she perched on the edge of the sofa. Her hair had come loose and she’d kicked off her shoes.

‘What do you mean?’ Maggie said, aware that her face was sweating and her chest felt tight.

‘He burst into the bungalow, convinced James was helping Jess. It just goes on and one, doesn’t it?’

‘What happened?’ Maggie managed to squeak. ‘He is all right, though, James?’

‘Well, fortunately Rob turned up. Otherwise I dread to think.’

Again, I was drawn in to the lives of some of my favourite sympathetic and relatable characters, along with their emotions, frustrations and traumas. It was great to be reunited with them. James and Laura are compelling and credible protagonists, their situation very realistic. The story is told alternately from Laura and Maggie’s perspectives, neither of their lives exactly unfolding as expected or wished for. They’re all still being buffeted in the wake of storm Jess and their troubles are far from over. Maggie’s hit and miss approach and lack of resolve doesn’t help anyone, including herself. As for Laura and James, they have a strong, loving relationship but fate hasn’t finished with them yet.

A lovely story thread relates to equine therapy. Ex-serviceman Mick, who suffers from PTSD and the resulting disorders, is terrified of horses, has a high level of anxiety and loss of self-esteem. How the therapy works is amazing.

The twists and merging of the threads to their conclusion are in keeping with real life situations. A surprise towards the end is typical of that particular character although I didn’t see it coming. Jan Ruth combines vivid and fully formed characters with expressive writing, a stunning backdrop and a dramatic story line which really did keep me turning the pages.

I chose to read and review Strawberry Sky based on a digital advance copy of the book supplied by the author/publisher. 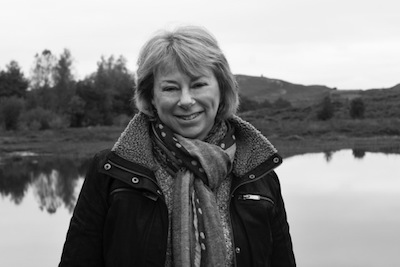 The real story began at school, with prizes for short stories and poetry. She failed all things mathematical and scientific, and to this day struggles to make sense of anything numerical.
Her first novel – written in 1986 – attracted the attention of an agent who was trying to set up her own company, Love Stories Ltd. It was a project aiming to champion those books of substance which contained a romantic element but were perhaps directed towards the more mature reader and consistently fell through the net in traditional publishing. Sadly, the project failed to get the right financial backing.
Many years later Jan’s second novel, Wild Water, was taken on by Jane Judd, literary agent. Judd was a huge inspiration, but the book failed to find the right niche with a publisher. It didn’t fall into a specific category and, narrated mostly from the male viewpoint, it was considered out of genre for most publishers and too much of a risk.
Amazon changed the face of the industry with the advent of self-publishing; opening up the market for readers to decide the fate of those previously spurned novels. Jan went on to successfully publish several works of fiction and short story collections and after a brief partnership with Access Press in 2015, has returned to the freedom of independent publishing.