Welcome to the final day of the Bloodhound Books Blog Tour for The Black Hornet, which I’m sharing with Chelles Book Reviews.

What do you do when the love of your life vanishes without a trace? If you’re ex-intelligence agent James Ryker you search for the answers whatever the cost, however much blood and sacrifice it takes…

Six months ago Lisa was taken from Ryker, and he’ll stop at nothing to find out who is responsible and why. Following a trail to Mexico, the ex-Joint Intelligence Agency asset soon finds himself in the firing line of enemies he long thought he’d left behind. Set-up for the murder of a former informant, Ryker is thrown into a crumbling jail run by The Black Hornet, the notorious leader of a Mexican drug cartel. But what connects the cartel to the informant’s murder, and to Lisa’s disappearance? And just who is the mystery American claiming he can help Ryker in his hour of need?

The Black Hornet is the second book in the bestselling James Ryker series. Part Bourne, part Reacher, it’s an explosive and action-packed thriller to rival any other.

In this follow up to The Red Cobra, James Ryker is on the hunt. It’s six months since he saw Lisa, the woman he loves. She’s disappeared, vanished as though she’d never been. Ryker has to find out who has taken her and why. His search and the resulting trail leads him to Mexico City and a rendezvous with informant Luis Jiménez. He and Jiménez’s paths had crossed when Ryker, then Carl Logan, worked for the Joint Intelligence Agency. Before any information could change hands, a police raid forced both men to run for their lives. Jiménez was gunned down and Ryker taken prisoner by Comisario Vasquez of the Policía Federal. Incarcerated in a dilapidated and squalid prison on the pretext he murdered Jiménez, Ryker’s troubles are only just beginning.

He’d been imprisoned before. Had been subjected to horrific treatment too – torture, both mental and physical. At least he wasn’t uninitiated in the barbary of man. There were experiences much worse than being stuck in a grimy cell in Mexico. Yet he was still hugely fearful of what lay ahead, if he couldn’t find a way out of this hellhole.

In the past, Ryker had always had the JIA somewhere behind him when he’d found himself in trouble. This time, Ryker was alone, and wasn’t yet sure what that would mean.

This first section includes violent scenes, it’s a wonder Ryker can function after all he’s been through in both his incarnations. However, The Black Hornet, leader of a Mexican drug cartel, has no intention of letting Ryker’s time in the grim, ruthless jail be anything but punishing. When Ryker has two separate visits from people wanting to help him escape, he reluctantly decides to accept, despite not knowing who theses people actually are or whether they can be trusted. He’s determined to find Lisa, whatever it takes. And against his better judgement Ryker is drawn back into the world from which he tried so hard to escape, surrounded by extremely dangerous people who think nothing of removing ‘obstacles’ they consider in their way. The plot is quite believable and is another example of how power and unethical conduct often goes hand in hand.

As I’ve come to expect from Rob Sinclair, this is a fast moving, well written story with lots of action. The plot is tight, tense and full of suspense, with vivid descriptions bringing places and events to life. A trail of corruption and false leads end in a twist I didn’t see coming at all. Looking forward to finding out how the story is resolved.

I chose to read and review The Black Hornet based on an advance reader copy supplied by the author/publisher. My thanks to Sarah Hardy and Bloodhound Books. 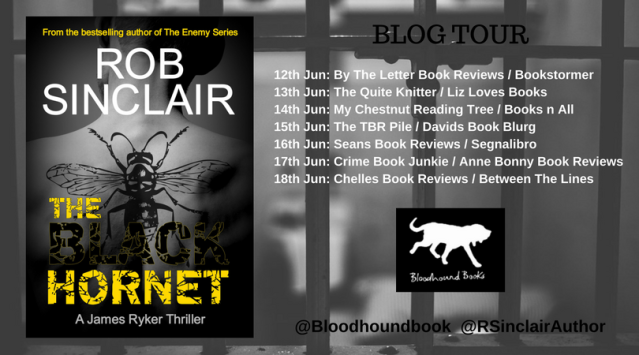 Rob is the author of the critically acclaimed and bestselling Enemy series of espionage thrillers featuring embattled agent Carl Logan, with over 250,000 copies sold to date. The Enemy series has received widespread critical acclaim with many reviewers and readers having likened Rob’s work to authors at the very top of the genre, including Lee Child and Vince Flynn.

Rob’s fourth book, the pulsating psychological thriller Dark Fragments, released by Bloodhound Books in November 2016, has been described as ‘clever’ and ‘chilling’ and an ‘expertly crafted’ story, and became an Amazon UK top 50 bestseller soon after its release.

​Rob’s James Ryker series follows on from the Enemy books, with the first novel, The Red Cobra, being released in April 2017 and quickly becoming an Amazon bestseller in the UK, US and Canada. The second book in the series, The Black Hornet will be released June 12th.

​Rob began writing in 2009 following a promise to his wife, an avid reader, that he could pen a ‘can’t put down’ thriller. He worked for nearly 13 years for a global accounting firm after graduating from The University of Nottingham in 2002, specialising in forensic fraud investigations at both national and international levels. Rob now writes full time.