This week I’d like to showcase Honour & Obey by Carol Hedges, the second of four books featuring Stride and Cully, policemen in Victorian London.

** A note from the author….the books are currently unavailable due to editing..back soon with Wonders & Wickedness, no 5 in the series, and brand new covers**

They’re well worth waiting for 🙂 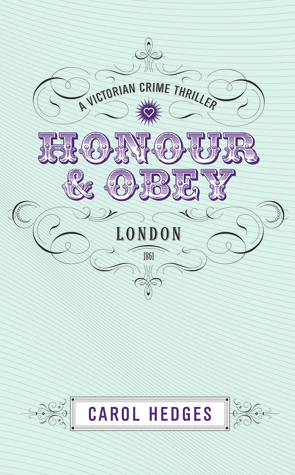 The long awaited sequel to Diamonds & Dust , Honour & Obey brings together Detective Inspector Leo Stride and his assistant Detective Sergeant Jack Cully. It is London, 1861 and a serial killer stalks the dark gaslit streets.
In another part of the city, Hyacinth Clout, bullied and despised by her older sister, decides to find love via the lonely hearts column of a newspaper. But will it be romance, or ruin?

A serial killer stalks the streets of London targeting the unfortunate women working in or for the sweat shops of the garment industry. Until that is, a well to do young lady meets her maker in a theatre box. The women all are all killed in the same way but unfortunately Detective Inspector Leo Stride and his Detective Sergeant, Jack Cully, of the detective division of the Metropolitan Police, aren’t making a lot of progress. The killer leaves no evidence and no witnesses have come forward. Only Emily Benet whose friend was the first victim, is willing to help the detectives. Stride and Cully must use any and all means at their disposal to try and apprehend the killer. Once again they are persecuted by the press for failing to do so in record time, with discrediting headlines, such as ‘Ghastly Murder’ and ‘Baffled Detectives’ which do nothing but hamper the investigation.

The story is peopled with a wonderful mix of fascinating, if not always likeable, and extremely well drawn characters both primary and secondary, with names reminiscent of the Dickensian era. We have, among others, the obnoxiously repulsive Rev. Bittersplit, the appealing Mullygrub children, horrid Lobelia Clout and the awful Morbid Crevice and his equally awful wife. Hyacinth Clout is an appealing character and one of my favourites. She rises above the cruelty of her sister and improves her life immeasurably; although not quite in the way she envisioned, after receiving a reply to her response to a personal advertisement in The News of the World. Hyacinth can’t think of anything worse than ‘a life of mindless and repetitious drudgery and boredom’.

Although the main aspect of the plot revolves around the murders, Carol Hedges cleverly and seamlessly weaves in sub plots and characters which connect and/or touch one another’s lives.

The story opens on a rainy, spring evening…

Stand awhile in the shelter of this doorway and listen. The noise of the pelting rain is almost drowned out by the great cacophonous cauldron of sound swirling around you. Horse-drawn omnibuses clip and clop, and slide on their steel wheels. Arguments break out amongst the shapeless huddled crowds hurrying to and fro. At the corner, a ragged soaked drunk raises his voice in discordant song. Church bells ring the quarter-hour in disunited chimes. A dog howls. It is an evening not to venture abroad, you might think. But you would be wrong.

As with Diamonds & Dust, the first book in the series, Victorian London is brought to life vividly and packed with period detail. The squalor and hardship which is the lot of the much less fortunate, contrasting sharply with the more affluent members of society, the class divide all too apparent. The women who work long hours sewing beautiful gowns for those more affluent members, the Foundling unfortunate enough to work for Mrs Whitlow in her less than salubrious boarding house and Tonkin, a shop boy apprenticed to Morbid Crevice for the last six years. They are all, along with the story, authentic and believable. The writing is witty and engaging, flowing smoothly through the narrative. I love the covers too, with the little symbols relating to each story. Looking forward to book three which is due out later this year.