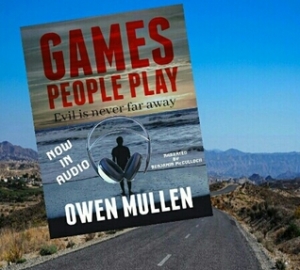 Thirteen-month-old Lily Hamilton is abducted from Ayr beach in Scotland while her parents are just yards away.

Three days later the distraught father turns up at private investigator Charlie Cameron’s office. Mark Hamilton believes he knows who has stolen his daughter. And why.

After being involved in the blog tour for Delaney, And So It Began I wanted to read more of Owen Mullen’s work, so I went back to his debut novel featuring Private Investigator, Charlie Cameron.

Mark and Jennifer Hamilton were enjoying at day at Ayr beach with their young daughter, Lily. Deciding on a last swim before they left was the worst decision Jennifer could have made. The water was cold, much more so than it had been earlier, and Jennifer found herself in a life threatening situation. Seeing Jennifer was in difficulties, Mark sat Lily in the pushchair before racing into the water after Jennifer. By the time Mark had pulled a limp Jennifer from the sea, Lily was gone.

A few days later Mark Hamilton turns up at Charlie’s office, telling him he knows who took Lily and begs for his help to find the person. Against his better judgement and after trying to persuade Mark to go to the police, Charlie agrees to take the case. He understands Mark’s suffering.

His face had the hollowed out look of a Halloween pumpkin. He didn’t answer my question.

‘You think I’m imagining it. My wife is clinging to her sanity because of me.’

‘I’m not asking you to get  involved in the official investigation. I want to hire you to locate a missing person. I want you to find Donna Morton. I’ll tell Jennifer when she’s better and Lily’s safe. Help me.’

First the blonde kid on the ferry, now this. Forces too powerful to resist were gathered against me, taking me where I didn’t want to go. I understood. I shouldn’t touch this one, yet I felt the decision slipping away from me.

Charlie is a likeable, easy to relate to and multi-layered personality. He’s one of those characters that, no matter how good at his job, things have a habit of not going according to plan. As we see events from his perspective it’s obvious that something has happened in Charlie’s past which still haunts him. His friends warn him off this case but Charlie can’t help himself. He specialises in finding missing persons, although not usually involving children.

The supporting characters are all well drawn, most of them flawed or dealing with personal issues but intriguing nevertheless. Witty interactions add a humorous edge to the narrative as the main theme of the story explores the possible consequences of deceit and infidelity, and living with the consequences.

The initial enquiries open up a much wider investigation, with multiple plot lines which shift seamlessly. This in turn gives an insight into Charlie’s character, what drives him and what he’s searching for, even though he realises it’s more than likely pointless. Owen Mullen has delivered a well structured, solidly written debut novel based in Glasgow and the surrounding area, with descriptions which easily conjure up vivid images. Great ending of which I had no clue until the author brought it all together.

School was a waste of time for me. Or rather, I wasted time; my own and every teacher’s who tried to get me to work. It took twenty years to appreciate what they were telling me. Life has rules. They aren’t written down but they exist nevertheless. I got that. Eventually. But by then I was thirty five.
Along the way I missed an important clue. At ten I won a national primary schools short story competition – and didn’t write anything else for forty years.
SMART BOY WANTED
APPLY WITHIN
As a teenager my big obsession was music. Early on I realised if I was successful I would probably be rich and famous and pull lots of girls.
So how did that turn out?
Well, you haven’t heard of me, have you? And this morning I caught myself worrying about the electricity bill. So the short answer is: one out of three ain’t bad.
Running around the country in a Transit van with your mates is fun. It’s your very own gang. You against the world. Until you fall out and the dream lies bleeding on the dressing-room floor.
When that happened I went to London
[everybody from Scotland goes to London, it’s like first footing at New Year, or ten pints of lager and a vindaloo on a Friday night; a sacred tradition]
and became a session singer. I also started gigging with different bands on the circuit.
Back in Scotland – most of us come back with wild tales of great success, none of them true – I wondered what I should do with myself and didn’t have to wait long for the answer. Her name was Christine. We got married, I went to Strathclyde Uni and got a bunch of letters after my name, and toughing it out at Shotts Miner’s Welfare, or dodging flying beer cans at the Café Club in Baillieston, was in the past. The long hair was short now, I wore a suit and pretended to like people I didn’t like because we were ‘colleagues’.
After many adventures I started my own marketing and design business and did alright. Christine and I were very happy, we travelled all over the place; India, Brazil, Botswana, Nepal, Borneo, Japan. One day I suggested we move. To the Greek islands. So we did. We bought land and built a beautiful villa overlooking the Mediterranean. Then the pan global financial crash happened, years of fiscal carelessness finally caught up with Greece; the exchange rate dived and the cost of living in Paradise went through the roof.
I had to do something. Then I remembered the short story competition. I had been good at writing, hadn’t I?
I wrote another short story called The King Is Dead…the first thing I’d written since primary school. When I typed the last word [Christine taught me to type] I held the pages in my hand then started to read. An hour and a half, rooted to the chair unable to believe what was in front of my eyes. For four decades I had shunned a god given gift. And as I read I started to understand why. It was awful. Not just bad. Bloody terrible.
But I kept going.
And now, eight years and seven books later, three literary agents plus two I turned down [they were reading a different book] I am a writer. My books are on Amazon. People buy them and come back for more.
One seasoned London agent has predicted I am destined to be ‘a major new force in British crime fiction.’
Yeah!
So is the moral: follow my example, find something you’re good at and stick with it. Hardly. I didn’t, did I? Do it your own way; it’s your life.