Winter 1917. As the First World War enters its most brutal phase, back home in England, everyone is seeking answers to the darkness that has seeped into their lives.

At Blackwater Abbey, on an island off the Devon coast, Lord Highmount has arranged a spiritualist gathering to contact his two sons who were lost in the conflict. But as his guests begin to arrive, it gradually becomes clear that each has something they would rather keep hidden. Then, when a storm descends on the island, the guests will find themselves trapped. Soon one of their number will die.

A House of Ghosts is primarily a tale of espionage during the height of WW1, with a dark and atmospheric supernatural thread.

Donovan and Kate Cartwright are involved with the Secret Intelligence Service under the supervision of Captain Sir Mansfield Smith-Cumming RN, but unknown to one another until they are sent on an assignment to Blackwater Abbey, set on an isolated island off the Devon coast.

Kate, previously a code breaker for Naval Intelligence, is tasked with attending a winter solstice house party at the Abbey, while Donovan is to arrive as valet to Kate’s supposed fiancé. Lord and Lady Highmount, the hosts, have also invited two mediums, Madame Feda and Count Orlov, with the purpose of trying to contact family members who were killed in action. There are several other guests, including Kate’s parents. Kate has special abilities which come in very useful in the haunted old Abbey. Donovan’s brief is to ascertain who is supplying key information to the Germans and thereby threatening the war effort, as well as keeping Lord Highmount safe.

There was a knock on the door. Highmount walked to his desk and sat, picking up the pen that lay beside the papers he was meant to be working on.

‘Come in.’ he said. It was only Vickers. He felt himself relax. Vickers was not someone who made him feel anxious – and there was much to be anxious about at present. There was something reassuring about the butler, even if he was fairly certain the man despised him and everything he stood for. He didn’t mind. He liked to know where he stood with people, and he knew where he stood with Vickers.

The extremely stormy and wintry weather ensures the house party of very diverse characters are stranded on the island and, as Kate and Donovan begin their undercover work, it becomes obvious not everyone is quite what they seem. Several people have a grievance against Lord Highmount, mostly due to the fact his company manufactures arms and is blamed in some measure for the loss of life, even as he has lost his own two sons. The story captures the terrible effects of the war extremely well, the mental trauma of the men who experienced the tunnels and trenches, as well as the bereaved waiting at home for news of their loved ones.

A House of Ghosts is a cross between a ghost story, military espionage and a murder mystery in the classic style—a spooky old house, a group of suspects contained in one place and a good dose of the supernatural. The setting is perfect, creating a distinct atmosphere with vivid descriptions of the stormy weather, the numerous ghostly apparitions and the mysterious person who arrives on the island unbeknownst to anyone.

Characters in the main are compelling, I particularly like the two main protagonists. 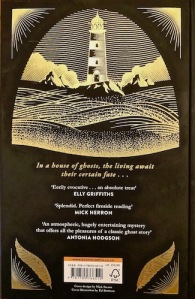 Chapters are short and succinct, alternating mostly between Donovan and Kate and often ending on a mini cliff hanger which keeps up the pace….and the page turning. I enjoyed it very much, especially the interactions and growing attraction between Donovan and Kate. The supernatural aspect adds atmosphere without overwhelming the story and the well thought through plot threads are concluded and tied up satisfactorily. Hopefully there’ll be more from Kate and Donovan as the ending suggests.

I don’t often mention covers, but this is simply stunning, front and back.

I chose to read and review A House of Ghosts based on a copy of the book supplied by Bonnier Zaffre.

William Ryan is an Irish writer living in London. He was educated at Trinity College, Dublin and the University of St Andrews and worked as a lawyer before taking up writing full-time. His first novel, THE HOLY THIEF, was shortlisted for the Theakstons Crime Novel of the Year, The Kerry Group Irish Fiction Award, The CWA John Creasy New Blood Dagger and a Barry Award. His second novel, THE BLOODY MEADOW, was shortlisted for the Ireland AM Irish Crime Novel of the Year, as was his next – THE TWELFTH DEPARTMENT. THE TWELFTH DEPARTMENT was also shortlisted for the CWA Ellis Peters Historical Dagger and named one of The Guardian’s crime novels of the year. The Constant Soldier, William’s fourth novel was described as “subtle, suspenseful and superb” by The Daily Mail and shortlisted for the HWA’s Gold Crown and the CWA’s Steel Dagger.

William’s latest novel (as W.C. Ryan), A House of Ghosts, was published in October 2018.

12 thoughts on “A House of Ghosts by W.C. Ryan ~ #HistFic #Crime with a supernatural thread @WilliamRyan_ @BonnierZaffre #TuesdayBookBlog” 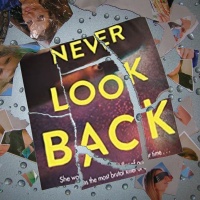 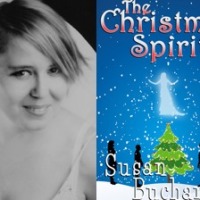