For Mercy Kilpatrick, returning to rural Oregon has meant coming to terms with her roots. Raised as a prepper, Mercy is now relying on her survivalist instincts to defend her town from the people the law can’t reach. But this time, an investigation calling up a dark past for her and police chief Truman Daly may be hitting too close to home.

Heavy and continuous rainfall for the last three days in Central Oregon had washed part of the road away near Eagle’s Nest leaving a drop down the steep hillside. Police officer Ben Cooley called it in so the highway department could assess the safety.

It looked pretty dangerous to Ben and, although it wasn’t a busy road, he didn’t want to risk any accidents. As he made a general search of the area he saw something he wasn’t expecting.

His gaze locked on one round, pale rock. With eye sockets. And teeth.

The flood water had uncovered the skeletal remains of several people. The FBI were brought in and the nature of the injuries stirred a memory for FBI Agent Mercy Kilpatrick. It has happened before, over twenty years ago. Two families had been murdered in much the same way. The acts of violence were so shockingly brutal they had not been forgotten, but the person responsible was caught and is in prison.  One of the children had survived the attack. The last of her several moves had been to the outskirts of Eagle’s Nest.

The room was silent. Mercy’s stomach had done a small spin when she learned Britta Verbeek had returned after decades of living elsewhere. She suspected the other agents were feeling the same thing.

While the FBI investigation focussed on identifying the bones, Police Chief Truman Daly had begun to look into a group of so called sovereign citizens, anti government extremists who believe they are entitled to reject authority and any and all laws of their choosing. He has a very strange encounter with one such person when he pulls them up for a traffic offence. Both investigations will test Mercy and Truman to their limits, physically and mentally, and as the danger mounts the more they uncover.

Mercy is still dealing with the repercussions of the previous case. Her leg is giving her trouble and the niggling unease and anxiety of not having her bolthole is always there, in the background. She won’t relax completely until the new cabin is built. Nevertheless, she pours all her energy into trying to identify the remains. As always, the romance is secondary to the tense and suspenseful plot.

I’m enjoying the character development and the very realistic dynamics between Mercy and Truman, taking into account their individual characteristics. They’re so different—Mercy, gradually getting used to opening herself up to trusting others again and learning it’s impossible to plan for every eventuality. Truman, patient and committed. The secondary characters also are well defined, particularly Rose, Mercy’s sister, who has put the trauma of the past behind her and is looking forward to a happier future. And Ollie, who I hope will appear again. Several chapters were written from the point of view of the killer, which was a great addition. 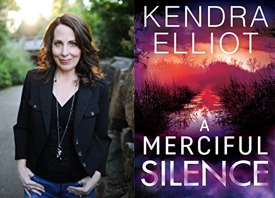 An Amazon #1 selling author, Kendra Elliot has sold over 5 million books. Get a free insider’s guide to Kendra’s books at www.KendraElliot.com. She grew up in the lush Pacific Northwest and still lives there with her family and three cats. She’s fascinated with forensics, refuses to eat anything green, and dreams of living every day in flip flops.

The BONE SECRETS NOVELS: HIDDEN, CHILLED, BURIED, ALONE, KNOWN and VEILED (a novella).
The CALLAHAN & McLANE novels are a spin-off of the Bone Secrets books. VANISHED, BRIDGED, SPIRALED, and TARGETED.