Kidnapped and raised by serial killers, Charlotte Rowe suffered an ordeal that made her infamous. Everyone in the world knew who she was. But no one in the world has any idea what she’s become…

Following on from Bone Music, Blood Echo wastes no time and dives straight into the action, giving an insight into the psyche of a serial killer who is on the hunt for his next victim.  Little does he know he’s the one being hunted.

Despite not completely trusting him, Charlotte Rowe has formed an alliance with Cole Graydon, owner of the pharmaceutical company responsible for the production of Zypraxon, the drug that gives Charlotte super human abilities and the power to regenerate.  Between them, for horrifically personal reasons, they are committed to hunting down serial killers and other predators before they have chance to harm any more women. When a test mission goes drastically wrong it leaves Charlotte unnerved by the power she wields when Zypraxon triggers in her system.

Charlotte was abducted and raised by the serial killers who numbered her mother in their list of victims. Exploited by her father after her rescue, she has no intention of letting anyone take advantage of her or her story ever again.

So I’m glad I lived. I’m glad they were caught.

And I’m glad I have a new purpose today.

While I’ve been stunned by the levels of secrecy Cole has been able to maintain so far, I’m still convinced that the work I’m doing is going to get out. Maybe it won’t be exposed all at once, but pieces of the truth might start to surface. And unlike the years I spent on that farm, I’m not going to let other people twist the story of my involvement.

If the time ever comes to tell this story, mine will be told in full, and by my own hand.

Taking time out with her partner, Luke, at home in Altamira isn’t quite the respite she was hoping for. Altamira is a quiet out of the way town, or it was until the developers landed. When Lacey Shannon, badly beaten, walks into the station wanting Luke to arrest the project manager it soon becomes apparent this isn’t the simple case Luke believed it to be but something much more sinister. Lacey’s request and what Luke finds are just the tip of a very large and deadly iceberg.

Even though Charlotte is irrevocably tied in with Graydon, she has no intention of letting things slide in Altamira and takes matters into her own hands. The multi layered plot is a good mix of action and character development. With an explosive beginning and ending, the middle section is slightly slower paced as we’re given more insight into the pharmaceutical side of things. Graydon’s past is explored in more detail, fleshing out his character and adding depth and emotion to the story. Dylan (Charlotte’s ex therapist), Marty (a close family friend who always has her back) and Bailey (Luke’s tech wizard brother) are excellently developed secondary characters, filling in more of the back history.

This is a complex storyline with several threads all eventually merging together. Christopher Rice has created a cast of well defined characters and taken a different slant on the definition of a thriller, giving it a suggestion of possible future scientific advances. After this ending, I’m looking forward to the third book.

I chose to read and review Blood Echo courtesy of Katie Olsen at Little Bird Publicity and NetGalley. 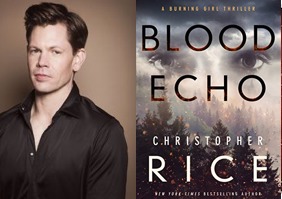 Christopher Rice is the recipient of the Lambda Literary Award and is the New York Times bestselling author of A DENSITY OF SOULS and the Bram Stoker Award finalists THE HEAVENS RISE and THE VINES. He is the head writer and an executive producer of “The Vampire Chronicles”, a television show based on the bestselling novels by his mother, Anne Rice. Together they penned RAMSES THE DAMNED: THE PASSION OF CLEOPATRA, a sequel to her bestselling novel THE MUMMY OR RAMSES THE DAMNED. BONE MUSIC, the first installment in his new Burning Girl series, was released March 1st, 2018, and the sequel, BLOOD ECHO, will be released in February 2019. With his best friend, New York Times bestselling novelist Eric Shaw Quinn, Christopher hosts the YouTube channel THE DINNER PARTY SHOW WITH CHRISTOPHER RICE & ERIC SHAW QUINN (#TDPS). THE DINNER PARTY SHOW began as a podcast and Internet radio show. You can download and stream all of their episodes at www.TDPS.tv. He lives in West Hollywood, California.