Today I have an extract from Caught In A Web by Joseph Lewis, as part of the blog tour organised by Rachel’s Random Resources.

The bodies of high school and middle school kids are found dead from an overdose of heroin and fentanyl. The drug trade along the I-94 and I-43 corridors and the Milwaukee Metro area is controlled by MS-13, a violent gang originating from El Salvador. Ricardo Fuentes is sent from Chicago to Waukesha to find out who is cutting in on their business, shut it down and teach them a lesson.  But he has an ulterior motive: find and kill a fifteen-year-old boy, George Tokay, who had killed his cousin the previous summer.

Detectives Jamie Graff, Pat O’Connor and Paul Eiselmann race to find the source of the drugs, shut down the ring, and find Fuentes before he kills anyone else, especially George or members of his family. The three detectives come to realize that the ring has its roots in a high school among the students and staff.

Graff at a Crime Scene

This is typical Detective Jamie Graff working the scene. More importantly, it gives insight into his character, his feelings and how he deals with others.

Graff drove around to the back of the strip mall, spotted flashing blues mixed with flashing reds and a small huddle of cops with little clouds of breath coming out of their mouths as they spoke to one another. They stood around stamping their feet to keep them from freezing and turning into cement blocks.

He rolled to a stop just outside the yellow tape and decided to leave his squad car running to keep it warm. He grabbed his traveler cup of hot coffee and got out, shutting the door behind him with a metallic clunk that didn’t echo in the dark night. It was that cold.

He spotted the ME, turned up his collar with his free hand and hunched his shoulders as he walked in that direction.

Mike Eisenhower, whom everyone called, Ike, was in his sixties and bald except for a fringe of snow-white hair that ran around the sides and back of his head like a misplaced halo. He was short and a little stooped, but his mind was clear and sharp.

“I will never understand the attraction, Jamie. I don’t get it.”

The older man shook his head and said, “A middle school kid, maybe eleven or twelve. On his back, head to the side in a puddle of frozen puke with snot frozen to his face. That’s what we have. What the hell is the attraction of drugs when it ends like this?”

The old man shrugged and said, “The kid is frozen stiff. I’d say four or five hours ago at least, but because of this damn cold, I can’t pinpoint it for you until I get him back to the office.”

“Do you have a guess as to what drug it was?”

He shook his head and said, “I’ll do a tox screen and be able to tell you for sure.”

Eisenhower’s office was in the basement of Waukesha Memorial Hospital, a five- or ten- minute drive away.

Graff squatted down next to the boy. Blond. Skinny. Wearing only a red hooded sweatshirt. No hat, no gloves, no boots. A pair of Jordan’s on his feet. His upper lip and cheek coated in icy snot. The pavement under his head was frosted in yellowish or brownish puke, depending upon how the light hit it. The boy’s eyes and mouth were partially open. A lovely picture of another dead kid added to the collection of dead kid pictures Jamie had stored away in his head. Not that he had wanted to hold onto any of them. Ever. No fucking way!

“Thanks, Ike. You have my number,” Graff said as he strolled toward the huddle of cops.

He recognized most of them and said, “Guys, anyone catch any radio chatter on missing kids? Kids who didn’t show up after dinner or who might have snuck out at night?”

They stamped their feet and shook their heads and muttered, “No.”

“Okay. I need all the dumpsters checked for anything that might fit the crime. Look for anything out of the ordinary, anything that doesn’t quite fit. I’ll need pictures of boot or shoe marks and any tire treads. Again, look on the ground for anything that might fit with the crime, anything out of the ordinary. Later this morning, I’ll need some of you to canvas the neighborhoods in a three or four block radius from here. Ike said the kid might be a middle school kid, eleven or twelve-years-old. I’m guessing unless this is a dump site, he’d live close by because he isn’t exactly dressed for a long hike. Not in this weather, anyway.”

As he walked away, he said, “Whoever decides to canvas the neighborhood can go home. Start about eight in the morning. That will give you a couple of hours sleep.”

Jamie poured the coffee out of his traveler cup onto the frozen pavement, no longer thirsty and sure as hell not hungry.

Joseph Lewis has written five books: Caught in a Web; Taking Lives; Stolen Lives; Shattered Lives, and Splintered Lives. His sixth, Spiral into Darkness, debuts January 17, 2019 from Black Rose Writing. Lewis has been in education for 42 years and counting as a teacher, coach, counselor and administrator. He is currently a high school principal and resides in Virginia with his wife, Kim, along with his daughters, Hannah and Emily. His son, Wil, is deceased.

Lewis uses his psychology and counseling background to craft his characters which helps to bring them to life. His books are topical and fresh and appeal to anyone who enjoys crime thriller fiction with grit and realism and a touch of young adult thrown in. 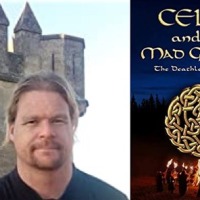