Something a little different today as I welcome Jill Caugherty with her review of Hearts of the Missing by Carol Potenza. Carol is an assistant professor of chemistry and  biochemistry at New Mexico State University.  She and her husband live in Las Cruces, New Mexico. Hearts of the Missing, her debut novel, is the winner of the 2017 Tony Hillerman Prize.

Carol Potenza’s brilliantly-plotted debut mystery, Hearts of the Missing, won the 2017 Tony Hillerman Prize and was published in December 2018. Although I don’t typically read mysteries, I was completely enthralled by this gripping whodunit story, made all the more compelling by Potenza’s excellent writing. 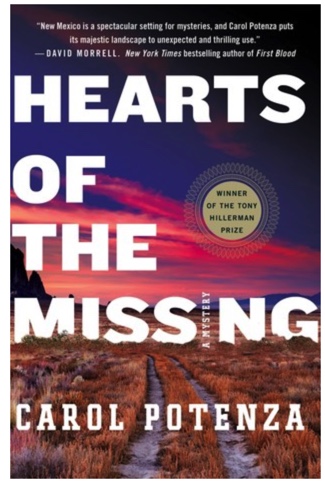 Potenza describes the stunning backdrop of her story, a Native American pueblo community in New Mexico, in gorgeous detail: “The panoramic view of distant mesas and the sloping plateau below, dotted to the horizon with scrubby pinon and juniper, made her heart swell. This evening the sun had painted the brush and trees orange and stretched their gray-brown shadows eastward behind them.  A small village – Chirio-ce – stood on the flattened top of a broad hill, just visible to the south. The colored rays of the sunset made the weedy trailers and junked cars stark and picturesque instead of tired and sad.  Behind her, the landscape started its rugged upward climb to the summit of Scalding Peak.”

Nicky Matthews, the female protagonist and chief detective investigating targeted murders in the Fire-Sky Native American community, evokes the reader’s sympathy with her personal and professional quandaries. Although not a Native American herself, Detective Matthews has gained the trust of the Fire-Sky pueblo, and has made good friends within the community, including Savannah Analla, a public safety assistant, and Ryan Bernal, another Fire-Sky officer. As she defies her police captain’s direction and digs into the mystery behind the murders, Nicky uncovers strange leads in the case that may even implicate those to whom she is close.

Key to her understanding of the Fire-Sky pueblo natives, many of whom have suffered discrimination and mistreatment, is Nicky’s own experience as a woman in a male-dominated profession. The reader learns that Nicky has suffered career setbacks and misfortunes in part because of her gender. But her assignment to the Fire-Sky community, which was meant to be a demotion, has in actuality been a boon, “the best thing to happen out of the whole sordid situation.”

Potenza inserts well-timed cliff hangers, red herrings, supernatural sightings (white rabbits and the Native American Wind Mother), along with well-timed plot twists to keep the reader turning pages. I read every chance I had to learn the answer to the riddle of the murders.

Because Potenza is an assistant professor of chemistry and biochemistry at New Mexico State University, she leverages accurate scientific facts to make the explanations behind the evidence linked to the murders all the more credible.

Lush with detail in a pueblo community of New Mexico, and complete with a sympathetic and credible cast of characters, Hearts of the Missing is a riveting, beautifully written literary mystery that delves into the hearts and minds of a Native American community, while examining friendships, cultural mores, prejudice, loyalty, and what it means to belong.

Thanks so much, Jill. It sounds like a wonderful read.

Jill is the author of debut historical/literary novel Waltz in Swing Time (Black Rose Writing, April 2020) about a young woman in Depression-era Utah who defies conventions and family ties to pursue her dream of becoming a musician. Learn more at www.jillcaugherty.com/waltz, Twitter and Facebook.