Society beauty Sylvia Stafford is far too pragmatic to pine. When the tragic death of her gamester father leaves her destitute and alone, she finds work as a governess in a merchant’s household in Cheapside. Isolated from the fashionable acquaintance of her youth, she resigns herself to lonely spinsterhood until a mysterious visitor convinces her to temporarily return to her former life–and her former love.

Sylvia Stafford had made a life for herself although it wasn’t at all what she had expected. In her previous existence as a baron’s daughter, warm hearted society beauty Sylvia was sought after and didn’t lack friends or suitors. Her heart was won by Colonel Sebastian Conrad, before he returned to the Sepoy Rebellion in India, and the attraction was most definitely mutual.

After her father had gambled away any inheritance she might have had, his mounting debts prompted him to commit suicide. In the ensuing scandal Sylvia’s friends and family cut her out of their lives. She had no choice but to seek employment and for the last two years had been governess in the Dinwiddy household.

An unexpected visit one day brought Sylvia’s previous life to the fore in a completely unforeseen and startling manner. Lady Julia Harker, Sebastian’s sister, wants Sylvia to accompany her to Pershing Hall, the family’s country estate. Her brother, now the Earl of Radcliffe after the deaths of his father and brother, has returned from India badly scarred in mind and body and refuses to see anyone or to leave the estate. Julia believes Sylvia could make all the difference to her brother. She remembered how happy Sylvia had made him.

Sylvia felt all the color drain out of her face. A long suppressed memory threatened to overwhelm her. “You don’t mean that your brother…That your brother is…”

“The Earl of Radcliffe. Though you would have known him as Colonel Sebastian Conrad—Oh dear! Miss Stafford!” Lady Harker leapt up and rushed to Sylvia’s side.

Sylvia and Sebastian were both labouring under misapprehensions and too ready to jump to conclusions. It had been so long and too much had happened since they first met. But Julia was worried about her brother. It was only too obvious how depressed and embittered he was.

The writing flowed smoothly, driven by the characters, and the historical aspects were well researched, giving an authenticity to the narrative while taking into account the after effects of war. Mimi Matthews has created two likeable characters with betrayals, lies, feelings of rejection and hurt to overcome. The romance is lovely despite the fact it doesn’t run smoothly due to another misunderstanding. I like the roles Julia and Milsom, Sebastian’s valet, played, bringing humour into the story.

The Lost Letter could have been a little longer with more initial details about Sylvia and Sebastian but nevertheless, it was satisfying emotionally and very enjoyable. 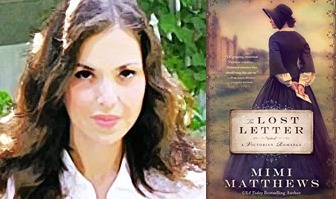 USA Today bestselling author Mimi Matthews writes both historical nonfiction and award-winning proper Victorian romances. Her novels have received starred reviews from Library Journal and Publishers Weekly, and her articles have been featured on the Victorian Web, the Journal of Victorian Culture, and in syndication at BUST Magazine. In her other life, Mimi is an attorney. She resides in California with her family, which includes a retired Andalusian dressage horse, a Sheltie, and two Siamese cats.

5 thoughts on “The Lost Letter: A Victorian Romance by @MimiMatthewsEsq #HistoricalFiction #BookReview”