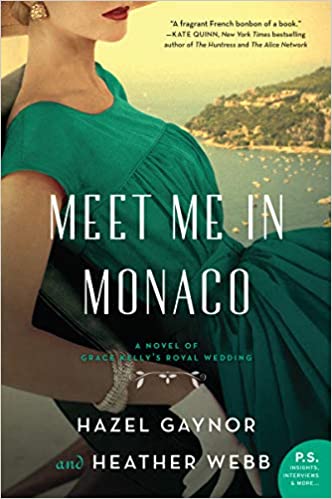 Movie stars and paparazzi flock to Cannes for the glamorous film festival, but Grace Kelly, the biggest star of all, wants only to escape from the flash-bulbs. When struggling perfumer Sophie Duval shelters Miss Kelly in her boutique to fend off a persistent British press photographer, James Henderson, a bond is forged between the two women and sets in motion a chain of events that stretches across thirty years of friendship, love, and tragedy.

Fact and fiction mingle in this delightful story. It’s 1955 and Grace Kelly was attending the Monaco Film Festival. Pursued by determined photographer, James Henderson, Grace sought shelter in Sophie Duval’s perfumery boutique. Little did either woman know a friendship had been born that would last a lifetime, or that meeting both of them would change Sophie’s life.

Since her beloved father had passed away, Sophie was the head of the Duval family business which meant having to divide her time between Cannes and Grasse. Not that she minded. Sophie always found it a pleasure to spend time in Grasse. Although in the process of developing a new fragrance and hoping to expand it into a new line, Sophie was aware finances would be a major problem. She was finding it hard to make ends meet as it was, and her mother was no help. She and Sophie’s boyfriend were united in doing their best to persuade her to sell, with their own agendas in mind.

I clenched my jaw to hold back the comments that rose to my tongue. She could stop wasting our money on her late-night spending sprees for one, and two, she could work for a change. With the new fragrance I was developing and tourist season just beginning, I could use the help. But dear Maman worked best from her chaise longue with a glass in her hand, barking orders at a maid we couldn’t afford.

Told from Sophie’s and James’ perspectives——with occasional news articles relating to Grace Kelly, her meeting and subsequent marriage to Prince Rainier of Monaco, and ultimately her tragic death——the three characters’ stories intertwine throughout this wonderful tale. I enjoyed how how Sophie and James interacted with Grace Kelly, each in their own way, the differing experiences of the wedding and particularly how Grace was portrayed.

The intricacies of perfume making were fascinating to read and Sophie’s passion shone through. Love and loss mingle with the vividly atmospheric descriptions of Monaco, Cannes and Grasse.

This is my first book from the Gaynor and Webb collaborations. The writing was so evocative and smooth, with no sign it was co-written. Any worries were completely unfounded. Historical fiction mixed with fact gives the story an added realism plus a glimpse into how the rich and famous live, along with the inevitable paparazzi pack, and I enjoyed it immensely.

Hazel Gaynor is an award-winning New York Times, USA Today, Irish Times, and international bestselling author. Her 2014 debut THE GIRL WHO CAME HOME won the 2015 RNA Historical Novel of the Year award, A MEMORY OF VIOLETS was a 2015 WHSmith Fresh Talent pick, THE GIRL FROM THE SAVOY was shortlisted for the 2017 Irish Book Awards, and THE LIGHTHOUSE KEEPER’S DAUGHTER was shortlisted for the 2019 HWA Gold Crown Award. LAST CHRISTMAS IN PARIS (co-written with Heather Webb) won the 2018 Women’s Fiction Writers Association Star Award.

Heather Webb is the USA Today Bestselling and award-winning author of 6 historical novels set in France. She’s also an avid traveler, foodie, and history nerd. A little more about her books: In 2017, LAST CHRISTMAS IN PARIS won the Women’s Fiction Writers Association award, and in 2019, MEET ME IN MONACO was shortlisted for both the RNA award in the UK and also the Digital Book World Fiction prize. Up and coming, Heather has a solo novel set in 20th century U.S. coming soon, as well as her third collaboration with her beloved writing partner, Hazel Gaynor, (as yet to be titled!) publishing in 2021 from HarperCollins.