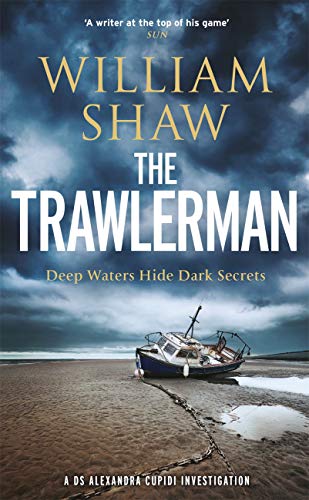 Published: May 2021 by riverrun

The naked corpses of Aylmer and Mary Younis are discovered in their home. The only clues are a note written in blood and an eerie report of two spectral figures departing the crime scene. Officer Jill Ferriter is charged with investigating the murders while her colleague Alex Cupidi is on leave, recovering from post-traumatic stress.

DS Alex Cupidi, suffering from mental and emotional burnout, is in counselling for PTSD. She experiences bad dreams and premonitions that something bad is about to happen. She is under strict orders to stay clear of any sort of active police work. Her life revolves around work and her daughter Zoë. Their relationship is challenging most of the time and Zoë is often out so, combined with the two, Alex is finding it very difficult to fill in the time.

While Alex is having a drink with one of the locals an incident occurs which brings DC Jill Ferriter to the scene. She was nearby attending a gruesome crime scene. Alex and Jill are close friends as well as colleagues and despite Jill’s attempts to keep Alex away from the case, Alex can’t help herself.

She scrabbled around, looking for the remote control as the reporter talked to the camera with the sombre face of someone delivering terrible news. Behind her right shoulder, crime scene officers dressed all in white, just as Jill would have been, emerged from the front door. Where was the remote? It had been next to her on the sofa a minute ago.

She felt a prick of irritation. Normally she would have already known every available grisly detail. All she could guess was that something very awful must have happened in that house, a little way down the coast from her.

There are several threads woven together seamlessly, including that of a trawlerman lost at sea several years ago. Bill South also becomes embroiled in the case and Alex’s lingering feelings of guilt about Bill make her desperately hope it’s not in a bad way.

The Trawlerman is not only a compellingly twisty police procedural which showcases the area with it’s diversity of wildlife, coastline and, in this case, the hard life of trawlermen. It is also peopled with realistic characters that develop in believable ways. Alex is mellowing slightly in that she is beginning to realise that not all situations demand complete openness when the result would be detrimental.

For me, this is one of the best series around. The plot unfolds  gradually and naturally, despite all not being as it seems, and always with that wonderfully rugged coastal backdrop.

Alex and Zoë’s relationship is captured perfectly as they learn to be more tolerant towards each other while still having those fraught mother daughter moments. It’s not easy to juggle single parenthood with a demanding job, coupled with mental health issues and a teenager beginning to find her own way in the world. An excellent crime drama.

The Sun hails William Shaw as “a master of modern crime”. His novel Salt Lane takes a character from his hugely praised standalone novel The Birdwatcher, to start a new series set in Dungeness. Val McDermid called it “Taut, terrifying and timely.” He’s also the author of the acclaimed Breen and Tozer series set in London in 1968-69. The Sun called The Birdwatcher, a crime novel set in Kent, a contender for crime book of 2016. Peter May says: “William Shaw is, quite simply, an outstanding storyteller.”

He’s also the author of several non-fiction books including Westsiders: Stories of the Boys in the Hood, about a year spent with the young men of South Central Los Angeles, and A Superhero For Hire, a compilation of columns in the Observer Magazine.

Image by Pawel Kozera from Pixabay