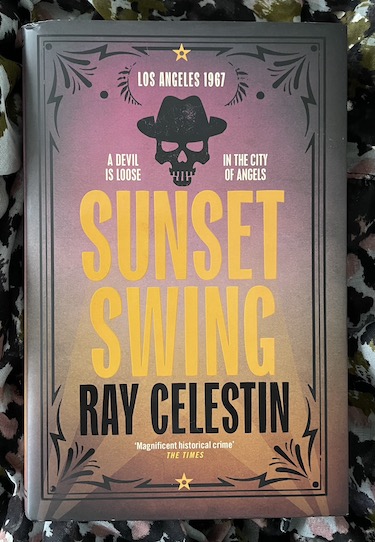 A young nurse, Kerry Gaudet, travels to the City of Angels desperate to find her missing brother, fearing that something terrible has happened to him: a serial killer is terrorising the city, picking victims at random, and Kerry has precious few leads.

Ida Young, recently retired Private Investigator, is dragged into helping the police when a young woman is discovered murdered in her motel room. Ida has never met the victim but her name has been found at the crime scene and the LAPD wants to know why . . .

The City Blues Quartet started in New Orleans in 1919, took in Chicago in the 20s, New York in the 40s, now we’re in Los Angeles in the 60s and each time and place has been depicted vividly and atmospherically, incorporating real characters and events. I’ve loved these books and am sorry this is the final one, but I enjoyed very much catching up with those characters I was drawn to during the series.

It’s nearing the end of 1967 and a serial killer was on the loose in Los Angeles. The Night-Slayer had claimed his third victim. Added to that, a Santa Ana was sweeping through the city, mayhem following its progress. Kerry Gaudet, a young army nurse, had traveled to Los Angeles, using her sick leave after being caught in a fireball, to try and find her brother Stevie, who had gone missing.

LA was sunshine; LA was darkness. LA was the golden dream and the broken promise. It was freeways and gridlock, canyons and smog, stars ripped out of the sky and entombed in the sidewalks. It was seven million souls dreaming the dream, drifters and grifters and corrupt politicians.

Ida Young, well into her 60s, had decided on retirement and sold her successful detective agency. She was sitting on her veranda, unsettled by the Santa Ana, when a patrol woman drew up outside. Sent by Detective Feinberg to find Ida, she had news of a homicide and Feinberg wanted Ida to attend. Ida’s name and address has been found at the scene and the murder looked like a mob hit.

More ripples of fear. Mob hits on women were almost unheard of. Almost. Some delicate thread had wound itself maze-like across the city, from a murder in a motel room to Ida’s door. Doing Feinberg the favour would mean heading out into the streets, into the violence and stewing darkness. But what really worried Ida was the prospect of getting involved in another investigation. She’d vowed never to go near one again.

Dante Sanfillipo, a week away from leaving town for good and looking forward to retirement and his recently acquired vineyard, had been summoned by the newly appointed head of the local mafia. As much as he didn’t want anything more to do with the mob, Dante knew he had no choice, despite the fact it was more than likely things wouldn’t end well.

Sunset Swing has a multilayered, compelling and intricate plot, with each characters’ story arc running concurrently, including that of Louis Armstrong. I love how the plot lines twist and turn and are all woven together seamlessly as the story progresses. There is more truth included than is comfortable, but unfortunately not surprising. Los Angeles is not the utopia most people expect, it’s a dark and dangerous place, rife with corruption and lawlessness.

The character development is ongoing. Louis, Ida and Dante are showing signs of their age, Louis mostly because of his lifestyle-always travelling and the battering his body has taken as a trumpet player. Although it could have been sad, the story does end on a positive note.

A series I could, and most likely will, read again.

Ray Celestin is a novelist and screenwriter based in London. His debut novel, The Axeman’s Jazz, won the CWA New Blood Dagger for best debut crime novel of the year. His follow-ups, Dead Man’s Blues and The Mobster’s Lament, were shortlisted respectively for the CWA Gold Dagger for best crime novel of the year, and the Capital Crime festival novel of the year. Both were featured on numerous ‘Books of the Year’ lists. The novels are part of the City Blues Quartet, which charts the twin histories of jazz and the Mob through the middle fifty years of the twentieth century.

Image by rpnickson from Pixabay