Welcome to my stop on the blog tour for You Can’t Make Old Friends by Tom Trott, courtesy of Rachel’s Random Resources.

Before my review here’s the book info… 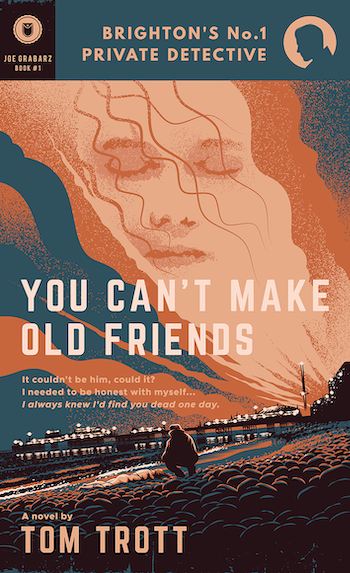 Blacklisted by the police. Being sued by a client. And broke. Things can’t get any worse for Brighton’s No.1 Private Detective, Joe Grabarz.

That’s when his best friend’s body washes up on the beach.

Could it really have been ten years? What happened? How could his life have ended like this? He needs answers.

But with the city in the grips of organised crime, and struggling to deal with an influx of legal highs, who cares about just another dead drug dealer?

Joe, that’s who. After all, you can’t make old friends

Private Investigator Joe Grabarz is finding life challenging since getting on the wrong side of the local police force, not to mention a pending lawsuit hanging over him, despite the fact he’s broke. And he’s about to lose his flat on top of everything else. When he gets a surprise, and very terse, text from George, a police officer who shouldn’t be calling him, he thinks perhaps his luck is changing. A body has washed up on the beach. Joe recognises the body as that of his erstwhile best friend but his illusions of being welcomed back are shattered by the new DCI who gives him a curt dismissal.

She got right to the point. And boy, did she make it sound bad. A police department so devoid of good brains that they needed me to help with the tough ones.  Well, not anymore. They had made that abundantly clear.

It’s been almost ten years since Joe saw Rory…..what happened during that time that resulted in his friend ending up as a mutilated corpse on the beach. He was determined to find out.

You Can’t Make Old Friends is written in the tradition of the old hard-boiled, noir detectives but in a modern setting. It reads as though the protagonist is actually telling the reader a story, tending to go off at tangents and peppered with snarky humour.

Based in Brighton, the story is narrated by Joe in the first person and includes quite a bit of history about the town, which isn’t always relevant to the story. It’s also a recollection of past events in Joe’s life, fleshing out his character and not always in a good light. I didn’t find him a particularly likeable character, a little too cocky. One point in his favour is his interactions with a homeless man.

The premise is good, I feel the passages about Brighton, although evocative if you discount the organised crime aspect, could have been condensed as they tended to slow the story, especially if you’re not familiar with the area. Tom Trott has a distinctive style of writing, one which sometimes has a tendency to be slightly long winded with descriptions. Having said that, I did get more comfortable the more I read.

I chose to read and review You Can’t Make Old Friends courtesy of a digital copy from Rachel’s Random Resources and the author.

Born in Brighton, I went to school in here, worked many jobs here, and have never lived anywhere else. I first started writing at school, where I and a group of friends devised and performed comedy plays for assemblies, much to the amusement of our fellow pupils. The young ones would cheer (and the old ones would groan) as we stepped up onto the stage, the buzz was tangible. It has been with me ever since.

As an adult I have written a short comedy play that was performed at the Theatre Royal Brighton in May 2014 as part of the Brighton Festival; Daye’s Work, a television pilot for the local Brighton channel; and won the Empire Award (thriller category) in the 2015 New York Screenplay Contest. I published my first novel, You Can’t Make Old Friends, in 2016; my second, Choose Your Parents Wisely, in 2017, my third, The Benevolent Dictator, in 2018, and now my fourth, It Never Goes Away, in 2019. When I’m not writing books, I’m writing about writing, books, and film on Medium.

My inspirations as a writer come from a diverse range of storytellers, but I have a particular love for the works of Raymond Chandler, Agatha Christie, Joel & Ethan Coen, Arthur Conan-Doyle, Daphne du Maurier, Alfred Hitchcock, Bryan Fuller, Ira Levin, Quentin Tarantino, Robert Towne, JRR Tolkien, and many many more books and films beside. If you can’t find me, or I’m not answering my phone, I’m probably at the cinema.